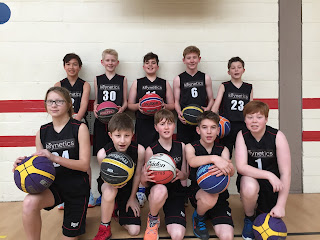 Going by previous YBL U13 South Division results Leadonites entered this match in a confident mood. However, despite their early lead it was Wolves who won the first quarter 12-8. Not until the seventh minute of the second quarter did Leadonites re-take the lead and even then Wolves came back to nose ahead again with less than a minute of the first half remaining. A converted free-throw and a score from open play gave the Ledbury team a slender 2-point half-time lead at 27-25.

An 11-0 run in the first 6 minutes of the third quarter seemingly put Leadonites in the box-seat but again Wolves came back to narrow the gap to six points and a 38-32 score line going into the final quarter.
With the small gym crowded with spectators Wolves further reduced the margin to just four points before Leadonites finally took a proper grip of the match and pulled away, effectively winning the tie in the third minute of the fourth quarter with 9 unanswered points.
Despite the final quarter charge the eventual margin of victory does not tell the tale of how tight this match was for most of its course and this took a monumental effort from all nine boys and one girl to leave the Kings School, Worcester with all three points.
This Saturday (27th January) Leadonites Basketball play host to a double-header of vital YBL U13 and U15 matches against Bournville Bears, with qualification for the post-season plays very much to the fore for each of the four teams involved. Spectators are welcome from 1pm onward at Ledbury Leisure Centre.
__________________________________________________________