Due to significant absentees this internal training match was not strictly a Seniors verses Inters encounter. Taliesin Chalkley and Tom Edwards were switched from the Seniors to the Juniors with Fin Hunter switching in the opposite direction. 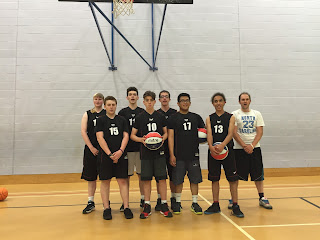 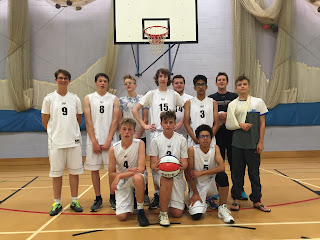 The match was also played as 4 x 10 minutes running clock quarters with only the last 2 minutes of the match on game clock timing. 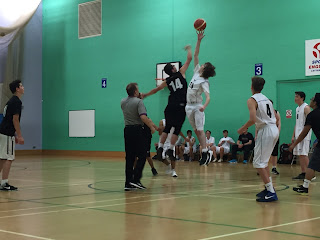 The match started off with Kylop Holland scoring for the Whites in the first minutes but Farren Davies levelled up the score within seconds. Kylop re-asserted the Whites lead in the third minute but once again the Blacks levelled up within a minute when Harry Orrett scored his first two points of the match. A big moment came in the fifth minute when Lewis Clark scored his first competitive match points with a mid-range basket to re-gain the lead for the Whites at 6-4. Once again that lead did not last long as Harry dropped a three-pointer to give the Blacks their first lead of the match. Whites team captain Taliesin Chalkley then scored three baskets in the final three minutes of the quarter to lead the Whites into an end of quarter 12-7 advantage. 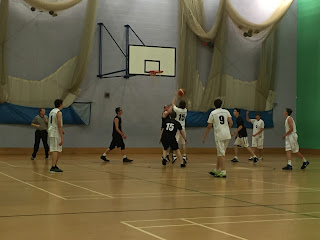 The Black team came out with a little more impetus for the second quarter and the match pendulum swung back in their favour. Farren scored in the first minute. This was immediately cancelled out by Kylop’s third basket of the match. Fin Hunter immediately replied for the Blacks with a two-pointer of his own before Harry scored a lay-up whilst being fouled. Unfortunately Harry was unable to convert the extra point. Moises Baltazar joined the scoring for the Whites with his first two points of the match and stretched the Whites lead out to 16-13. But the rest of the quarter was dominated by the fast running style of the Blacks as Harry narrowed the score to 16-15 in the fourth minute. John Baltazar had the chance to take the lead for the Blacks but her free throw would not drop through the hoop. This allowed Leo Stanley to extend the Whites lead when he added two points of his own. Two quick fire baskets from Farren brought the margin back to just one point. Tom Edwards came the lead back to the Whites a two of his own before Kayleigh Edwards' ninth minute score meant the Blacks took a slender 21-20 lead into the half-time break. 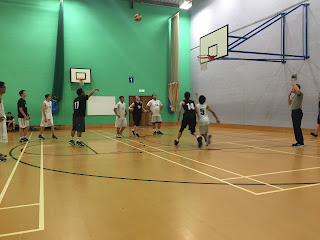 The third quarter was a low scoring affair as the lead changed hands three times. First up Thom Davies converted a close range jump shot to reinstall the White team as leaders in the third minute. One minute later Farren snatched the lead back for the Black team before harry extended that lead for the Blacks out to 25-22. Thom Davies then sank a three shot to level everything up as 25 points apiece before Kylop scored his fourth and final basket of the evening in the sixth minute of the third quarter and that’s the way it stayed, at Whites 27 Blacks 25, until the end of quarter buzzer. 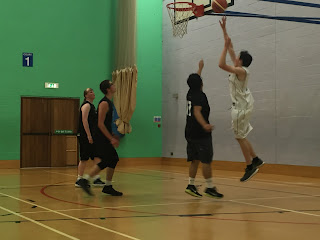 Harry levelled the scores at 27 all in the first minute of the fourth quarter. Jordan Taylor replied for the Whites in the third minute to give the White team the lead again but almost immediately the Blacks went to the other end of the court and drew level again with a lay-up by Harry. The two teams exchanged offensive plays for four minutes without either side scoring despite the best efforts of Cuba Stanley, Jake Horner and John Baltazar to get their names on the score sheet for the Black team. Then Thom Davies broke the deadlock in the seventh minute. Taliesin extended the lead out to 35-29 with two close range baskets both in the eighth minute. Foul trouble for the Whites came in the form of a fourth personal for Jordan and a missed free-throw attempt for two points from Kayleigh and the White team were seemingly coasting the final two minutes to victory until Farren landed his first, and the game’s third, three-pointer to take the score to White team 35 Black team 32. Ultimately the Black team’s high tempo running game left them running out of steam and Jordan iced the White team’s victory with the final basket of the match in the last minute of the encounter. 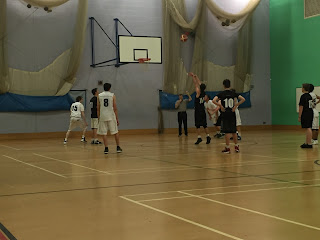 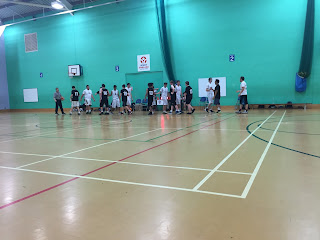 It's finally here as this coming season's Leadonites U18s (Seniors) play our 16s (Inters) in an Intramural Match at Ledbury Leisure Centre on Thursday, 25th August.

Roll-call to all eligible Leadonites players: -
(School year taken as at 1st September 2016)
- All players to arrive at the sports hall by no later than 7:30pm -

All other club members, friends and family are not just welcome to come and watch but we would actively ask you to come along and support our boys and girl as they start their preparations for the 2016/17 season. 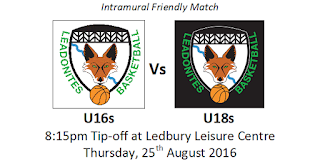 Edwards and Chalkley on temporary transfer

With at least four U16s players unavailable due to injury or holidays Tom Edwards and Taliesin Chalkley will now be playing for the Leadonites U16s team in the Intramural U16s Vs U18s match this Thursday night at Ledbury Leisure Centre.

Having successfully managed to hold an intramural friendly match between our own U12s and U13s (from last season) a few weeks ago, it is now the turn of next season's Leadonites U18s (Seniors) and our 16s (Inters) teams to play each other at Ledbury Leisure Centre on Thursday, 25th August.

To the players Parents: -
We realise that not all players will be returning to the Leadonites fold this coming season and yet more will be unavailable due to holidays, etc but we need 7 players for each team for this to take place. Therefore please confirm your son's/daughter's availability as soon as you are able to by reply to this email.

Roll-call to all eligible Leadonites players: -
(School year taken as at 1st September 2016)

This match will kick start the pre-season preparations for both the Inters and the Seniors so is very important for those that want to be involved playing for Leadonites for the coming season.

All other club members, friends and family are not just welcome to come and watch but we would actively ask you to come along and support our boys and girl as they start their preparations for the 2016/17 season.

Rules & Guidelines for the players

The Leadonites Basketball training sessions will be designed to be fun whilst still giving each and every player a though grounding in the fundamental basics of good basketball. But to be able to achieve this aim the following must be understood by all players…..

1. Smoking by Leadonites Basketball players/members will not be permitted whilst those individuals are representing the club either at training sessions or matches/tournaments - regardless of the player's/member's age.

2. Foul and abusive language will not be tolerated by players/members whilst representing Leadonites Basketball at either training sessions or matches/tournaments.

3. Violence towards fellow Leadonites Basketball players/members/coaching staff will not be tolerated under any circumstances.

4. ARRIVING AT TRAINING
All players are to be at the training venue 15 minutes prior to the start of training.
- This allows for any administration required such as: -
Hopefully the above will still allow for maximum usage of court time available

5. Players are to wear appropriate clothing and footwear only.
- These does not need to be expensive: -

6. Long hair must be tied back.

7. No jewellery is permitted, whether it is piercings, rings, necklaces, brackets or other.

8. Anyone wearing anything considered dangerous by the head coach will not be allowed to participate in training sessions until such item has been either made safe or removed.

9. Anyone wearing clothing bearing inappropriate text or imagery will not be allowed to train until the garment has either been covered up or removed.